Your business security system is uniquely suited to your location and needs. A lot of choices go into the installation process – what kind of cameras do you need? Where do you need them? Do you need access control – and if so, which credentials will you use? Are you going to install burglar, smoke, or motion detectors? While you’re answering these questions, you also need to consider how you’ll manage these systems. Owning and operating your own business security system server gives you a powerful, versatile security solution.

Choosing to install and maintain your own server is not a decision made lightly. The initial cost can be prohibitive, the installation is invasive, and you’ll need a team of technicians to maintain and update the servers. Once it’s installed, though, a local server provides you with a more powerful solution than a cloud-based one. If you do go with an on-site data center, you value in-house control and the flexibility to customize your system further.

Every access control system needs a database of approved credentials – a whitelist – and every good system needs a place to log entry and exit data. While cloud-based systems are largely based on convenience, a hard-wired on-site server is more customizable. Local databases and management programs can be more easily tailored for specific needs and business security solutions, and since they’re rarely accessible wirelessly, they’re more physically secure than Internet-based cloud storage.

Continuous video recording and archiving is limited on cloud-based systems. Local servers store as much footage as you design them to, for as long as you deem necessary. Video analysis becomes easier on-site, too, giving you valuable insights into your business’ operations by creating reports from recorded footage. 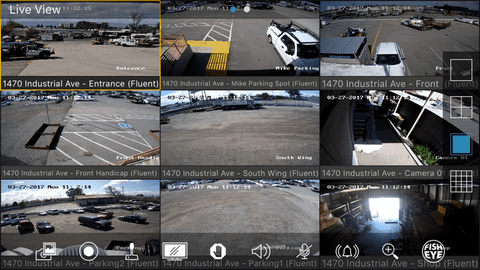 A central server also offers you the option to use a dedicated Video Management System for your surveillance cameras. If you have enough cameras that you need more than one NVR, you’ll probably want a VMS to handle your recorded footage. A VMS also allows you to manage multiple sites, integrate real-time analytics, back up your data, and record point-of-sale data into the footage. The software can also integrate your other business security systems, allowing you to manage your access control and burglar alarms from a single unified interface.

What is a RAID server?

One way to secure the data on your server is to use a Redundant Array of Independent Disks. A RAID setup is more than multiple hard drives to store your information – it uses a special algorithm to place the data strategically so your data can be recovered if a drive fails. There are several types of RAID configuration, each with its own benefits and downsides. The most common types used are RAID 0, 1, 5, 6, and 10. 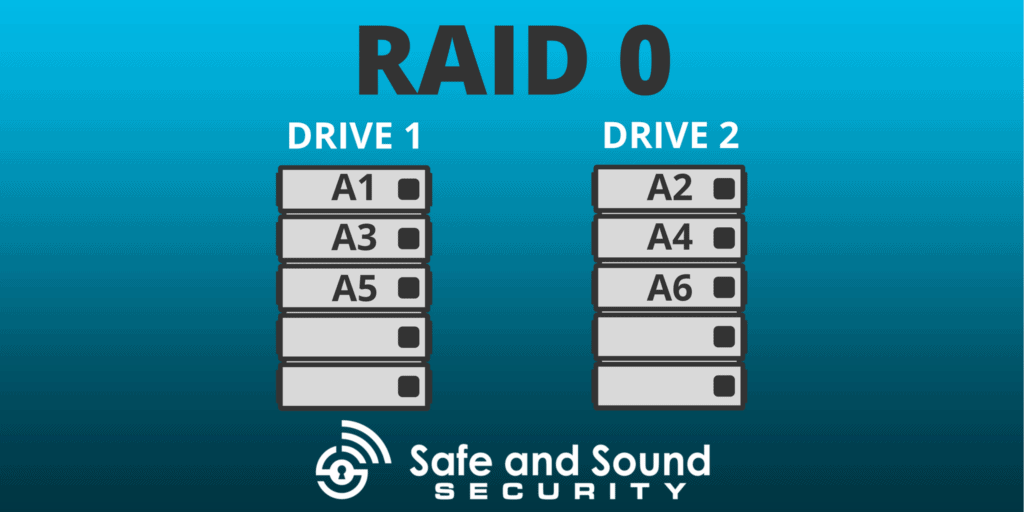 One of the fundamental principles in how data is stored in a RAID is called striping. The first section of data is written to the first drive, the second section to the second drive, and so on. When you reach the last drive, the process starts again on Drive 1, distributing data evenly across the available drives. A RAID 0 system is just a basic striping system, and as such isn’t actually redundant – it only improves read and write performance. 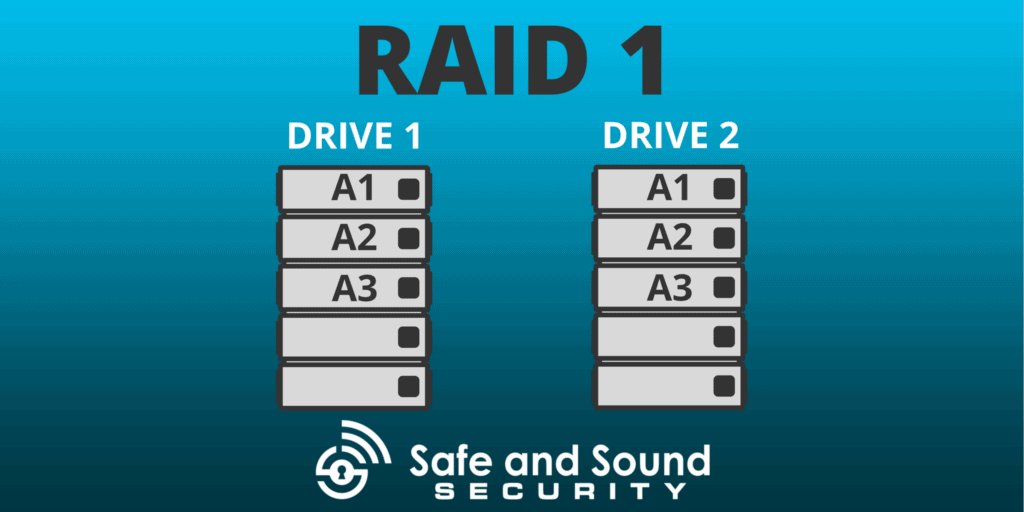 Found in a RAID 1 system, mirroring writes everything to a single drive and then copies it to another. It’s effectively a real-time internal backup of your server, and while you’re limited to the size of the smallest drive in the system, you only need one of your drives to continue operations as normal. 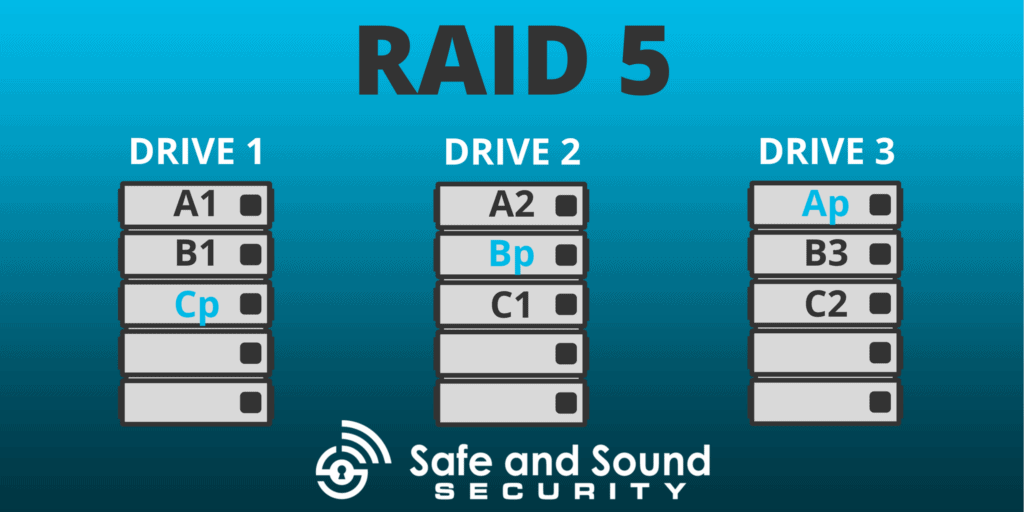 Data reconstruction is done through the creation of parity data, an extra subsection of data associated with each section of data. The parity information is calculated by running an XOR function on each section, which returns a 1 when there are an odd number of 1’s in the section. If a subsection is lost to drive failure, the parity data will show you what the missing digits are based on the number of 1’s remaining. For example, if the parity bit says you need an odd number of 1’s and there are an even number, your missing digit is a 1.

One of the most common RAID setups is RAID 5, which uses three or more hard drives to store your data and reconstruct it using parity information. The subsections are striped across the disks with their parity codes on alternating drives – A’s parity data is stored on the final drive, B’s is stored on the second-to-last drive, and so on.

In the event of a drive failure – say Drive 2 fizzles out – the data can be reconstructed bit by bit based on the parity codes. The missing parity data stored on Drive 2 can simply be recalculated. A RAID 5 system only has a fault tolerance of 1 drive, however – if more than one drive fails, the data cannot be reconstructed. RAID 6 adds an extra parity code, creating a 2-front failure system. 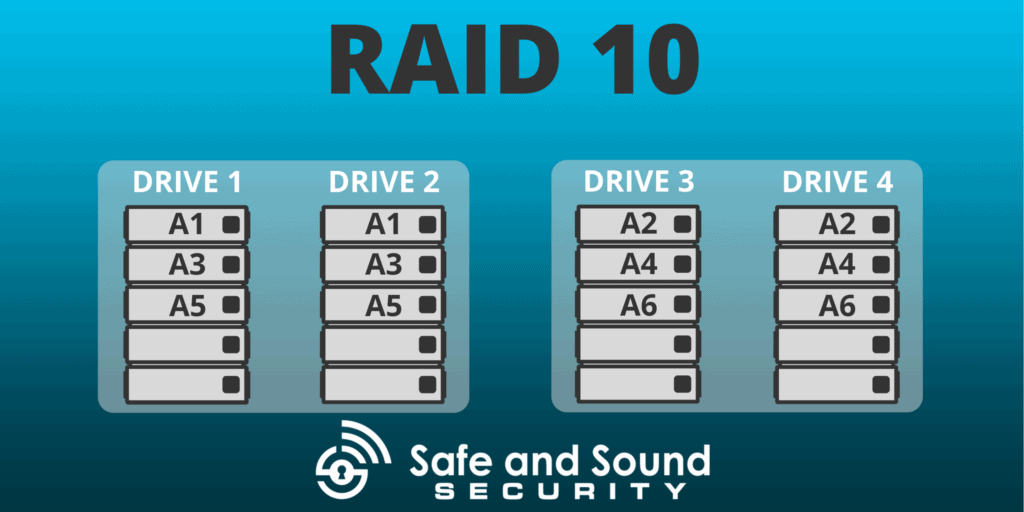 Technically RAID 1+0, this configuration combines the striping of RAID 0 with the mirroring of RAID 1. Your data is mirrored first, then striped across 4 or more drives. The fault tolerance of RAID 10 is 1 for each mirrored set – you can lose Drives 2 and 3 without actually losing any data. Because there is no parity calculation, though, losing Drives 3 and 4 means whatever was on those disks is unrecoverable.

Remember, a RAID server is not a backup of your data (with the exception of RAID 1). In place of a RAID system, you might opt for cloud storage of your footage and database. You may even want to use a cloud service for all of your security management. Brivo is a good example of a cloud-based security solution, allowing you to skip the costly installation and upkeep of an on-site server. The downside is limited flexibility and functionality compared to the inherent modularity of your own server.

Whatever management your business security system needs, the entire setup should be professionally installed. A customized security plan ensures you don’t have blind spots, exposed wires, or other exploitable vulnerabilities when your systems are installed. The whole purpose of a business security system is to prevent problems – you don’t want to create any new ones. Whether you choose a server or cloud-based security solution, make sure you know its limitations before you start relying on it.