When you use a camera today, you’re using an incredibly complex system to record a scene. Whether you’re a security professional looking for the best way to keep tabs on a building or a photographer wanting to capture a beautiful scene, you rely on your camera’s lens just as much as you rely on its hard drive or management software. The camera lenses from mounted surveillance cameras to high-power DSLR’s to the tiny cameras in your smartphone, operate on exactly the same principle for the exact same purpose: Bend light to a sensor to preserve the image. 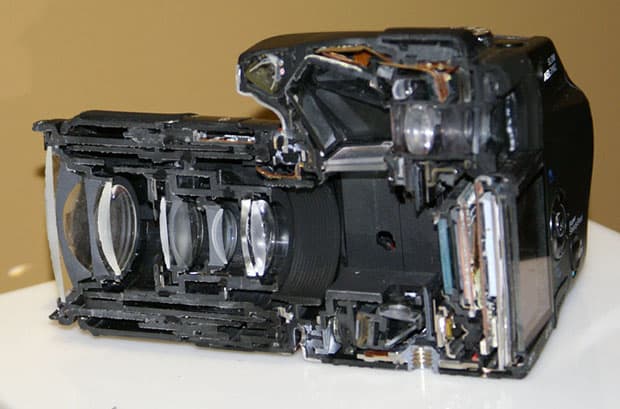 At its most basic, a lens is just a piece of curved transparent material that focuses or disperses light. Most camera lenses are made from glass, but they can be made from crystal or plastic as well. Light changes direction as it passes through a lens, and can be directed in any number of ways to solve everyday problems. One of the most common applications are eyeglasses to correct impaired vision; an optical prescription corrects visual aberrations before light enters the eye. Flashlights and headlights, on the other hand, bend light from a source to illuminate an area. In the common DSLR (Digital Single-Lens Reflex) camera, a variety of lenses reflect light into the camera’s photosensitive image plate, which records the image as a digital file.

Camera lenses come in all shapes and sizes, depending on the direction you want to bend the light. Bulging convex lenses, like those found in a magnifying glass, focus light on a single point. When the lens is held at the right distance from your eye and an object, the image appears larger. Concave lenses, on the other hand, spread out light from its origin.

It’s important to distinguish a single optical lens, also called an element, from the complete cylindrical body that mounts on a camera. A camera lens almost always contains multiple glass elements to reduce distortion and increase control over the final image. The housing also contains an opening called an aperture that controls the amount of light allowed to pass through to the sensor.

Camera lenses with a fixed focal length are called prime lenses; they can’t change their field of view unless the camera itself moves. Camera lenses designed to change their focal length are called zoom or varifocal lenses. Multiple elements move back and forth inside the lens case, changing the magnification and focus of the image as desired. This process differs from digital zoom, which simply crops and enlarges an existing image, therefore reducing the resolution of the section you’re looking at. Zooming in with a lens rather than a digital program gives you more details on a discrete object, even from a distance. Being able to change your focal length gives you a much more versatile platform to capture images, especially since physical zoom lenses don’t cut down on the resolution like digital zoom does.

Other camera lenses are designed to capture the widest field of view possible. These wide-angle lenses are popular in security applications where coverage is more important than identification. The enhanced field of vision comes with a price, however – the image is distorted, particularly at the edges. 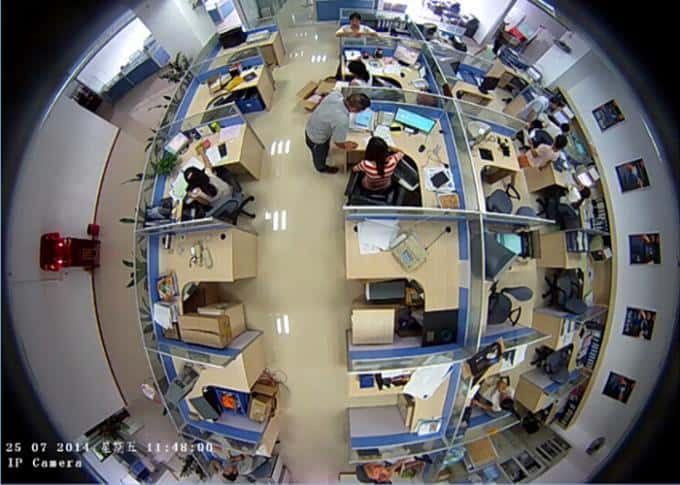 The most extreme wide-angle lenses are called fisheye lenses, providing a 360° field-of-view. This comes at the cost of massive, distinctive warping. Fortunately, de-warping software can still correct the distortion and even turn it into a series of separate images, giving you multiple feeds through a single camera.

The other important part of a lens housing determines how bright your image will be. A camera uses three main components to adjust the amount of light captured by the image sensor. Shutter speed determines how long light hits the sensor, and a value called ISO controls how sensitive it is to the light. Only one of the three, the aperture that limits the amount of light allowed into the camera, is located in the lens body. A good image is always a balance between these three controls and the amount of light in the environment. 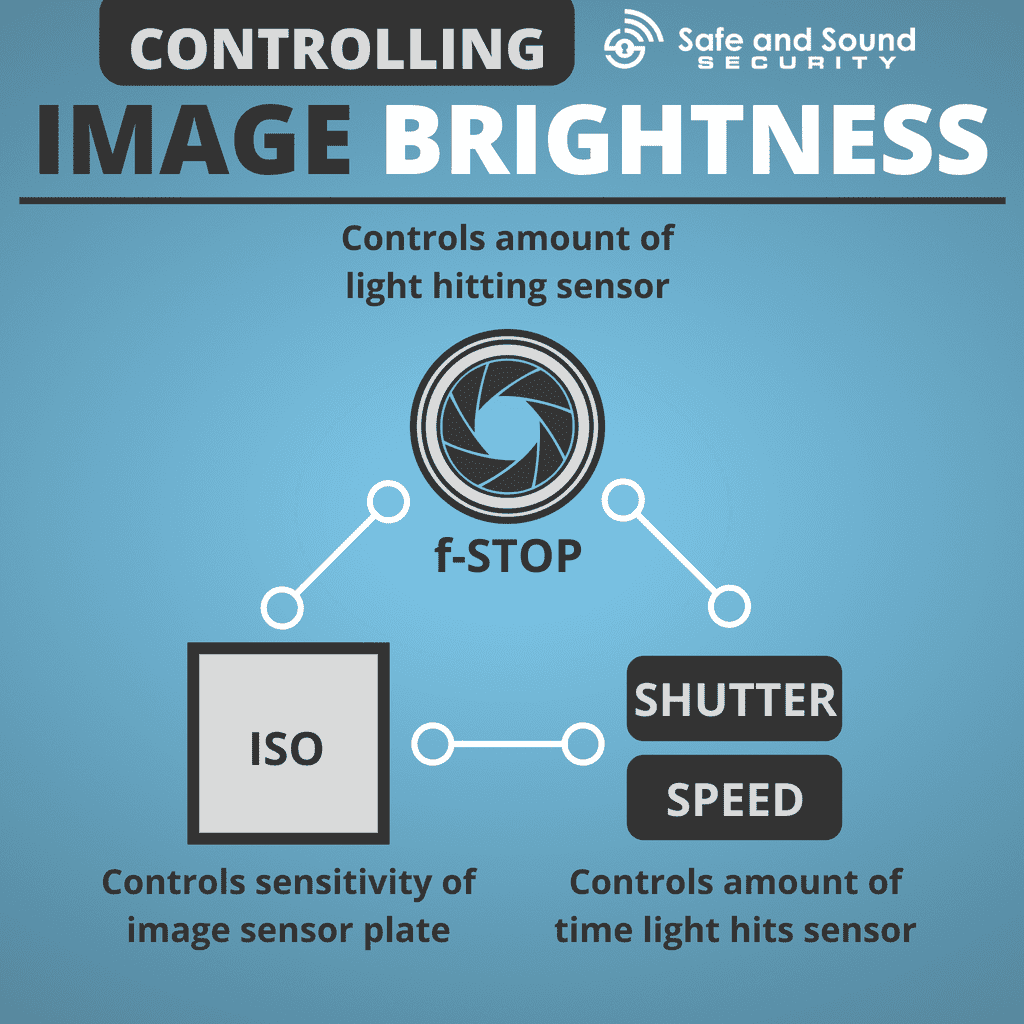 The aperture (or iris) is a series of metal blades that form a circle that allows the image through the lens housing to the shutter. The settings are measured in f-stops, with smaller numbers indicating a wider opening. Changing the f-stop also changes the depth of field, or how much of the image is in focus. A larger f-stop – a wider aperture – gives you a deeper plane of focus, giving you a clearer picture at almost all distances.

So far we’ve talked about taking still images from a standard DSLR, but what about recording video from a security camera? The basic principles are the same, but there are a few small differences that make things a little easier for surveillance cameras. Common DSLR cameras use removable, interchangeable lens housings to tailor the lens to your needs. Some security cameras use the same concept to provide a versatile security solution, with some of them even going so far as to use standard DSLR lenses. Most surveillance cameras, though, have integrated lenses that cannot be removed or even replaced – if a lens is damaged, the whole camera must be replaced.

Dome, turret, and fisheye cameras use prime lenses with a fixed focal length, so they can’t change their field of view except through digital zoom. Their aperture is most often set as small as possible (meaning a large f-stop number), putting as much of the image in focus as possible. These plug-and-play cameras are best used to provide coverage over wide areas like parking lots without too much tinkering with the settings, as you won’t need to adjust them after they’re installed. 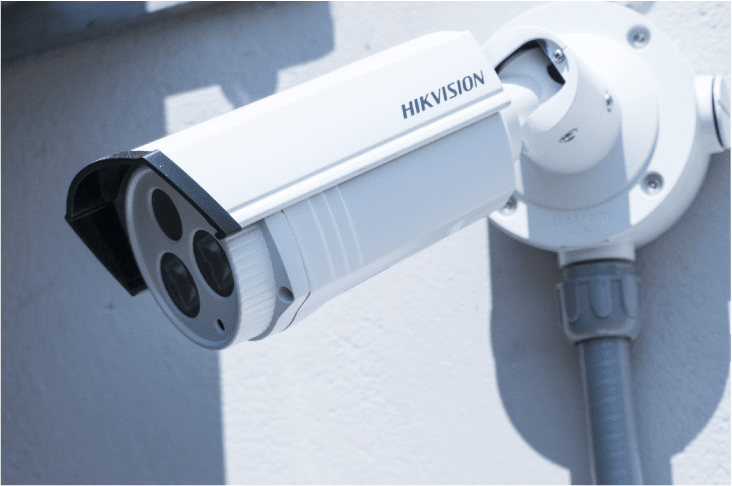 Bullet cameras, on the other hand, often have varifocal lenses that can change their field of view and zoom in on distinct objects. Sometimes these zoom cameras have an autofocus feature that changes the aperture automatically, but others need their f-stop set manually from the software. A large depth-of-field isn’t as important when you want a sharp focus on a license plate or a face, but image resolution is.

Understanding your optics is an important part of being a photographer, and it’s useful for those interested in security as well. Surveillance cameras might not have as many different types of lenses available to them, but knowing how your cameras work gives you more insight into their capabilities and limitations. In turn, that informs your security plan, and you’ll have better coverage and cameras if you know what cameras will serve your unique security needs.