Security systems aren’t just about preventing intrusions, theft, or other malicious behavior. Your residential and commercial alarm systems are also designed to alert you to accidents and other natural problems. Smoke detectors are a critical early-warning system to protect you from fires, whether they’re just getting started or already raging. There are two basic types of smoke detectors – ionization and photoelectric.

Inside Of A Smoke Detector

Both kinds of smoke detectors include a power supply, a detector, and an electronic horn or siren. The power supply can either be a battery or a cable that ties into another power source, typically the building’s. The horn is used to signal a fire or indicate a low battery with shrill sirens or an intermittent series of ear-piercing chirps, respectively. The detection mechanism depends on the type of burning object the alarm is designed to detect. 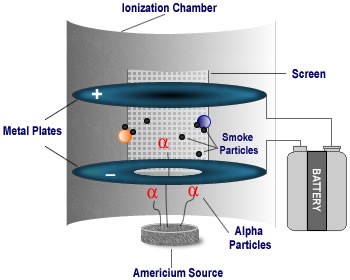 In an ionization smoke detector, air is ionized by a slightly radioactive element (commonly americium-241). The alpha particles emitted by the americium charge air particles that are allowed to flow into the ionization chamber. The charged air particles move between two charged plates according to their new positive or negative charge, completing an electrical circuit. This can be done simultaneously in both a sealed control tube and an open section. The control tube is used to determine a baseline, while the area open to the ambient air is used to detect fires. When smoke enters the detector, the ionized air bonds to the smoke particles, breaking the circuit and sending out an alarm. Ionization detectors are best at detecting fires that are producing flames as opposed to smoldering fires.

Photoelectric (or optical) sensors, on the other hand, use a beam of light to detect changes in the air. The light can be visible, infrared, or ultraviolet, and detects smoke based on the light scattering that occurs when smoke partially obstructs the light. There are two types of these optical detectors – in one, the light is directed into the sensor and the alarm is sounded when the received light falls below a certain threshold due to scattering. In the second, more common kind, the sensor only receives light reflected from smoke, and triggers when the reflected light rises above a tolerable level. All photoelectric smoke detectors react better to slow-starting, smoldering fires than ionization detectors, but despite some difficulty they can also detect flaming, fast-growing fires as well. Optical smoke detectors react to smoke earlier than ionization detectors, making them the primary choice for residential and commercial safety systems.

Residential smoke detectors are often stand-alone, battery-powered units mounted on the ceiling, but they can be wired into your home’s power as well. It’s also possible to plug them into your burglar alarm, either wirelessly or through cabling. Integrating them into your alarm system gives you more control over your system and can let you monitor them from your alarm keypad.