Ever wondered how burglar alarms work? They come in wide variety of configurations, but generally how alarms work is with a network of motion detectors and door and window sensors integrated with a control panel. These elements all work together as one system to detect breaches in your home or business, and alert you or the authorities.

The most basic burglar alarm systems monitor the perimeter of a home or building for breaches, such as opening a door or breaking a window. They do this by creating an electric circuit, called either an open-circuit or closed-circuit.

In an open-circuit system, electricity only flows when the trigger is activated – opening the window, for example – and completing the circuit sets off the alarm.

What Does The Control Panel Do?

The circuit and sensors alarm system are monitored by the control panel – the computer that arms the security system and detects breaks in the electric circuit. This control panel has its own power supply, so the burglar cannot cut off the power before breaching the perimeter. When the circuit is broken, the Control Panel will either sound an audible alarm or alert the security company – in some cases, both.

The Control Panel is integrated with a touchpad or touchscreen, where the alarm can be armed and disarmed. Usually, the only way to turn off the audible alarm is by punching the alarm’s PIN into the touchpad.

Note that the panel and the touchpad are not necessarily in the same place; the panel is often hidden in an out-of-the-way space to make it harder for burglars to find and disable.

How Do Wireless Alarm Systems Work?

Wireless burglar alarms work similarly to wired ones, but the sensors communicate with the control panel via a radio frequency. The control panel may then communicate with you or the security company by either a wired or wireless connection – often WiFi, Bluetooth or a cellular signal. These kinds of systems often work in conjunction with smart home systems, such as Z-Wave. 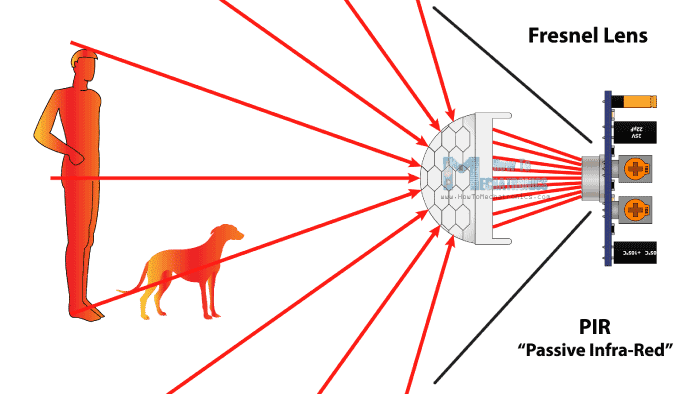 Circuit alarm systems do an excellent job of protecting the perimeter of your home or business and detecting any breaches in the door or windows. But what about outside the building, or if the burglar has managed to find their way in? This is where motion sensors come into play.

Radar-based motion sensors monitor rooms using microwave energy, which is emitted into short bursts that bounces back at the motion sensor in the same pattern it was emitted. If the pattern comes back broken – because a burglar has entered the room – the motion sensor detects this and trips the alarm.

Photo-Sensor motion detectors, on the other hand, emit beams of light that connect with a light sensor, creating a circuit of sorts. When something moves in the room and blocks the light signal, the sensor picks this up and alerts the control panel.

A more advanced form of motion detector is PIR – Passive Infrared. These sensors detect infrared energy, enabling them to detect dramatic increases of heat in a room – such as would occur when a burglar enters an otherwise empty room.

When a motion sensor detects motion in the room, it will automatically alert the control panel, setting off the alarm.

What Happens When A Burglar Tries To Get In?

Generally, when an alarm system detects a breach, it will sound the audible alarm – alerting anyone in the vicinity and potentially scaring away the burglar.
Many burglar alarm systems are monitored by a professional security company, which is automatically alerted when a burglar (or other disturbance) triggers the alarm. A monitoring company will get in touch with the emergency contact for the address, check on the situation, and in emergencies, contact the police or fire department.