An Introduction to Security System Encryption

If you take your security seriously, you’ve probably wondered whether or not your system itself is encrypted. Security systems store sensitive data, such as passwords and PINs, and smart systems often connect to your smartphone or other device. Without an encrypted security system your passwords and other personal data could be at risk. 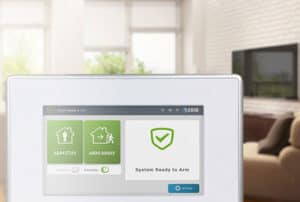 Why Do Security Systems Need Encryption?

If you have a wireless security system, it’s important that it and the network contain encryption. Unencrypted security systems, especially those that connect over Wi-Fi, can be a weak point where passwords and other personal info can easily be lifted – as has been demonstrated in some wireless systems in recent years. With your password and system info stolen, hackers could disable your system.

At the bare minimum, ensure any wireless home security system running off Wi-Fi has WPA-AE2 (Wi-Fi Protected Access). Update the firmware regularly, be sure to use a strong password, and consider an encrypted security system. 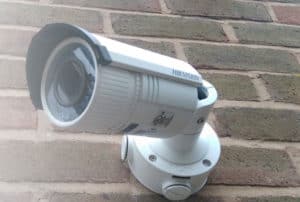 Most modern security cameras today – especially those for smart-home systems – are capable of encryption. Most commonly, this is 128- bit or 256-bit AES encryption. This common form of encryption is easy to work with, and usually more than enough for home systems – but they can still be hacked. For systems that require even more encryption and security, there are more options, however – such as End-to-End encryption.

What is End-to-End Encryption for Security Cameras?

End-to-End Encryption is a much higher and more-secure level of encryption, that poses a much greater obstacle to anybody who might try to hack your system than basic 128-bit or 256-bit AES. End-to-end encryption gets its name as it uses a key that is held only by the sender and recipient (the endpoints), which unlocks and decrypts the data once it has reached either endpoint. This way, even if the data (in this case, video footage) is intercepted by external hacking, it cannot be read or accessed, appearing as nothing more than a scrambled key.

End-to-end encryption is currently more popular among home security cameras than commercial-grade options. Home security systems encrypt the video feeds before streaming them to your phone, where the app possesses the necessary decryption key and decrypts the video signal for you to view. Should someone try to hack your camera feed for any reason, it – and your phone – will stay safe.

E2EE cameras are becoming more popular among commercial systems, however.  An end-to-end encrypted security system is simple and easy with IP camera systems, which are now in use at most businesses and facilities. E2EE, however doesn’t protect your data when it’s most vulnerable – at the endpoint, which in this case, is the storage drive or server. Endpoints – the device themselves – are where most hacking and data theft occur, as the data has already been decrypted in-device.

To combat this, manufacturers are also encrypting and securing their video management and storage systems with the same end-to-end encryption, creating an all-in-one encrypted system. Used in conjunction with end-to-end encrypted IP cameras, footage can be recorded, transferred and stored while entirely secure.