Access Control is an integral part of any business or facility’s security, ensuring that only those with proper authority and credentials can gain access. There are a variety of different methods for verifying identity and credentials – from prox cards to PIN codes to fingerprint scanners. To increase security efforts, many facilities are now opting for access control systems with an even greater level of security – 2-Factor Authentication.

What is Two-Factor Authentication?

2-Factor Authentication is a form of Multi-Factor Authentication that simply requires two levels of security measures to authenticate a user’s credentials. Most systems or devices – whether access control systems, your smartphone, or your debit card – rely on only one form of authentication, usually a password, PIN code or keycard. This is enough for many systems, but others call for beefed-up security to prevent hackers or burglars from getting in. That’s where 2FA comes in.

Multi-Factor Authentication instead calls for a combination of at least two out of three types of factors – a Knowledge Factor, Possession Factor, or Inherent Factor.

A Knowledge Factor is something that the user knows or commits to memory, such as a unique password or PIN code. This is the most common and basic form of authentication factor.

Possession Factors are an item or token given to the user or that the user possesses, such as a key card (in swipe card systems) or even a physical key. It could also be a biometric factor, such as fingerprint, or in software systems, a digital signature or cryptographic key.

Digital Possession Factors are often referred to as one of two types – Connected and Disconnected Tokens.

Disconnected Tokens have no connection to the access control system, and often use a built-in physical screen to display a generated authentication key, which the user then manually enters into the access panel.

Connected Tokens, on the other hand, are devices that are physically connected to the system and automatically transmit the appropriate credentials for access to the computer. These include common tokens such as smart cards and USB drives – which are quite cheap and easy to use.

Inherent Factors are inherent in the user itself – usually biometric methods such as fingerprints, face scans or even retina scanners on more secure systems.

Multi-Factor Authentication is often seen in online logins for websites and apps, which will first require you to enter username and password, and then verify identity with a unique code sent via email or SMS – adding one more layer of security against hackers, who must have not only the Knowledge Factor (password) and the Possession Factor (unique email/SMS code). 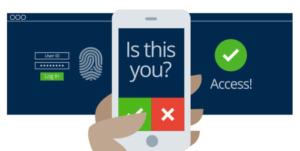 What’s the Difference Between Two-Factor and Two-Step Authentication?

Despite sounding similar, these two terms are not interchangeable. While Two-Factor Authentication requires at least two different types of factor, two-step does not necessarily; it requires two steps, but they can be two of the same form. This can, in theory, make Two-Step Authentication systems somewhat less secure than Two-Factor systems. These two forms are usually used for different purposes and systems, however; plain two-step authentication, without different factors, is more likely to be used for consumer-grade applications, while two-factor is often used in systems requiring much more security.

When an employee or user tries to gain access to an entry point in your facility, 2FA will require two steps; usually, a Knowledge Factor, followed by a Possession Factor or Inherent Factor.  This will help ensure they are who they say they are, reducing the risk of stolen passwords or keycards being used to gain access. Hackers would have to steal not only two different factors, but two different forms of authentication – an even more difficult task to pull off.