Spend enough time looking at security cameras – and cameras of any type – and you’re likely to see the terms optical zoom and digital zoom being bandied about. Almost all security cameras have some form of digital zoom, while most nicer models will have some form of optical zoom; many even have both.  But what’s the difference between these two types of zoom? Is one better than the other, especially for security purposes? Let’s take a look at these different forms of zoom a bit more closely and see which one is right for your CCTV system.

Optical zoom is the traditional form of zoom found on most cameras, such as DSLR’s and film cameras, and uses the camera lens itself to magnify the image and zoom in on objects in the distance. The lens will actually move in and out of the image – just like a telescope or pair of binoculars. This is usually a better option, as it magnifies the image to fill the entire sensor – resulting in a clear, crisp image, as long as the quality of the lens if comparable with the zoom distance. (In other words, an inexpensive lens will not be able to produce extremely-long zoom without a loss of image quality).

At extreme zooms, optically-zoomed images will begin to soften and lose clarity, though this loss of quality will not be as marked as that of a digital zoom lens. 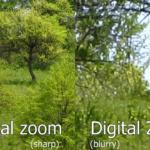 While optical zoom uses the actual physical lens and focal length to magnify the image, digital zoom relies on algorithms applied by the camera’s processor to zoom in on the image. It does this by essentially cropping the image in the center and enlarging the thousands of pixels that make up the image, as well as interpolating the pixels to complete the image. (Interpolation is essentially making up new pixels to fill in the gaps between the existing pixels).

Digital zoom is this not a completely accurate term, then, as it merely enlarges the image already taken. This gives the appearance of the objects in the image as being closer, mimicking the effect of standard optical zoom without actually zooming in on the object in the manner an optical zoom camera might.

Digital zoom can be quite powerful, often going anywhere from 2x to 32x or beyond. Eventually, however, the image quality will begin to degrade, as pixels can only be enlarged and reproduced so far before becoming distorted and fuzzy.

In effect, digital zoom will generally not produce the level of detail needed for making your security footage useful.

With that said, while optical zoom will almost always be higher quality and crisper than a digital zoom, digital zoom capabilities have become much improved in recent years. As camera resolutions become larger, processors become more powerful and algorithms become more sophisticated. In many situations and at lesser magnification levels, the quality of a digitally-zoomed image will be like that of an optical zoom, and cameras are continually improving.

Furthermore, at very high resolutions (such as with 4k security cameras), they may not be as much need for interpolating and processing, as you can simply crop the full-size image and have plenty of pixels left for zooming in without as noticeable a degradation in quality.

Also, digital zoom does not change the angle or depth-of-field of the image being captured, in the same manner that optical zoom does. When a camera lens (whether for security cameras or regular photography cameras) zooms in on the image, the increased distance between panes of glass results in a much narrow plane of focus – making the object in focus appear further away from the background than it actually is. 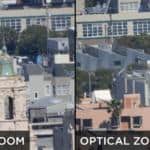 To obtain the most powerful zoom possible, many cameras and manufacturers are now combining optical and digital zooms. Doing so can result in zooms between 100x and 200x – though there will still be a large amount of quality loss at that amount of zoom. In some cases, this could mean the difference between capturing the license plate number on a suspicious vehicle or identifying the face of a burglar, even if the quality is not as good as that of a solely optical zoom of similar strength.

To sum up – optical zoom is almost always better than digital zoom for maintaining image quality at extreme zooms and should be your first consideration when choosing CCTV cameras. If, however, you need extreme zoom capabilities beyond what optical zoom can give you, there are good, improved options for digital zoom out there – especially those that combine digital and optical into one sharp image.