How To Choose An Apartment Intercom System

An intercom system is an easy, affordable way to enhance both the security and convenience of your apartment complex, allowing residents and visitors to easily communicate with each other.  Integrated with a convenient access control system, an apartment intercom will make allowing visitors, deliveries and other personnel into the building painless. 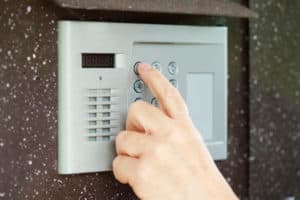 Intercoms aren’t just intercoms anymore; they’re now fully integrated into your access control system and can open and lock doors with the push of a button. This allows for convenient, quick monitoring of everyone who gains access to the building and makes access control efforts easy.

In some cases, intercoms can have complete access control systems completely integrated into them, including features such as built-in card readers. In many cases, they are used in conjunction with an automatic gate opener to create easy system for allowing visitors to enter the property.

Do You Want Video?

Newer intercoms – like those from AIPhone – now actually come with video screens integrated into both the intercom box itself, as well as at stations throughout the apartment building and in each apartment. These allow residents to see exactly who is at the gate and verify identity before letting anyone in. Cameras can be either integrated directly into the intercom access panel or placed nearby, depending on the system, and are an easy way to add an extra layer of visibility and security to your apartment building. Integrated cameras range from basic fixed models in the front of the box to PTZ cameras found in higher-end models, allowing for powerful, flexible camera functions.

Generally, these video signals are transmitted via IP network, but in some cases, may be transmitted wirelessly via a cellular connection. IP networks are usually more reliable and capable of stronger, clearer signals, as well as more scalable systems with more doors and stations. But, the convenience of a wireless intercom system has its own merits and can often be the right choice for your system.

One of the coolest new features found in video intercoms is remote calling and access, which allows the system to dial a resident’s mobile phone if someone rings their bell when they aren’t home. They can speak directly to the visitor through a dedicated line, usually VoIP, straight from their phone. And if they have a smartphone, residents can actually see a live video stream straight from the intercom panel, from virtually any location – in much the same manner as remote surveillance monitoring. Remote access not only makes residents lives easier, but increases security and effort. 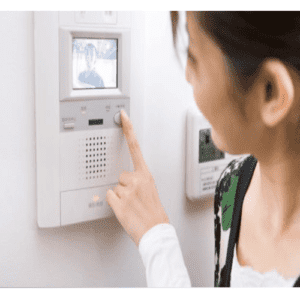 Do You Want A Wireless or Wired Telephone Entry System?

As mentioned, apartment intercom systems can come in both wired (generally via IP networks and Cat5E or Cat6 cables) or wireless (usually a cellular connection, but sometimes via WiFi). Choosing the right one will depend on the needs and setup of your building; for an older building, it might simply be easier to install a wireless setup that doesn’t require modifying walls and other physical pieces. Wireless is also a good option on a budget and can be easily upgraded down the road without needing to replace physical wiring.

With that said, wired systems are generally considered to be more reliable and more capable, despite being more expensive to install. They can also transmit clearer, higher-quality video signals. If you have the resources, a wired system is usually the better option especially if you’re interested in a video intercom system; though they may be more expensive to install and maintain, they’re usually worth the effort.

Check out how Safe and Sound installed an Aiphone IX Series 4 button video intercom to protect this brand new multi-tenant building in Burlingame, California, along with technology from Doorking, Brivo, and Eagle Eye: